Muscle Building and Combat Sports? These goals can also be combined. | Steroids4U.eu

Muscle Building and Combat Sports? These goals can also be combined.

Combat sports and muscular body building are two different worlds. But they have something in common - hard power training.

Bodybuilding versus combat sports. They are two different sports worlds, but they often meet in gymnasiums. While bodybuilding and fitness are all about body aesthetics, muscle quality, and long-term work on the smallest details, combat sports are dynamic, fast, striking.

Nevertheless, even a boxer needs muscle, strength and contraction. True - too much volume is rather detrimental, and heavier weight classes dominate highs. Today, I'll tell you what to do about exercising when it's your goal to do martial arts.

What does a boxer need? What muscles? What kind of training?

Have you ever seen a boxing match? At first glance it may seem simple - since the ring is small, the jumpers do not have to sputter or run long distances. After a few minutes they have a break for refreshments and snacks. Easy, though? No way.

Even though the ring is really small, boxers are constantly moving. Not only do they change their place in the ring every now and then, they often jump, avoid the wounds of the opponent, and start challenging assaults. But that's not all! In order for the boxer to win the match and to weaken the opponent as much as possible, his strikes must be strong and accurate. The Boxer must be extremely concentrated in every single second, because any blessing in his defensive can lead to a precise and painful strike from the opponent. If the match is settled at 12 laps, it is a real drine.

The match is thus a combination of constant movement, enormous concentration, and precisely directed power. Boxer therefore needs dynamism, stamina, precision, concentration and strength - both physical and psychological. And so his training must look.

Boxing training can be much more interesting and varied than classic bodybuilding training. There is not so much heavy burden on it. It is a combination of conditioning exercises, dynamic exercises and the overall strengthening of muscles, joints and bones. 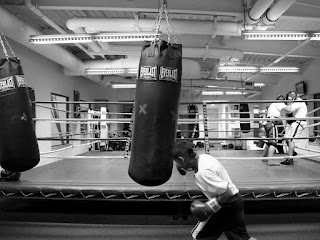 As far as physical fitness is concerned, the aim of the wrestler is to keep the whole match in the best possible form. The weaker boxer can handle the first 5 rounds perfectly, but then he gets tired and his opponent uses it. That is why he has to know how to properly distribute his strength so that he is also in the form of a final round. Otherwise, K.O.

But we will be more interested in exercising in the gym. As I mentioned earlier, at a height of 175 centimeters, for example, a 100-kilogram boxer is hard to win. The objective of such an athlete is to develop as much force as possible in the shortest possible time. He wants to strike the opponent so he can feel it and then pulls himself off. So if you imagine the right hook, during that short distance to the opponent's head, it must develop as fast as possible and must strive for the hardest hit. Similarly, there is an attack offense, which must be fast and brisk.

Each exercise is not aimed at the highest possible weight, but for the most dynamic version, the shortest time for which the course will take place. It does not focus on the whole movement of the concentrate, such as the bodybuilder. Boxer wants to transfer the weight from point A to point B and back as quickly as possible. For example, they often use rails or overalls to gain mobility, simplicity, and dynamism.

Finally, I offer you a comparison of a more static and dynamic exercise. I chose drep because you probably know his technique. The bodybuilder tries to control the movement in full. The goal is to get the best muscles to read and, of course, to grow. Therefore, he chooses higher repeat counts.

How does a drep boxer make? He will certainly choose a lighter weight, but he will add to it. For him, the second part of the movement and jump in the air will be more important to him. This will provide a "lightning impulse" in the muscle that performs the same movement as a bodybuilder, but faster and with less muscular precision.

Training a fighter and a bodybuilder is a very individual matter.